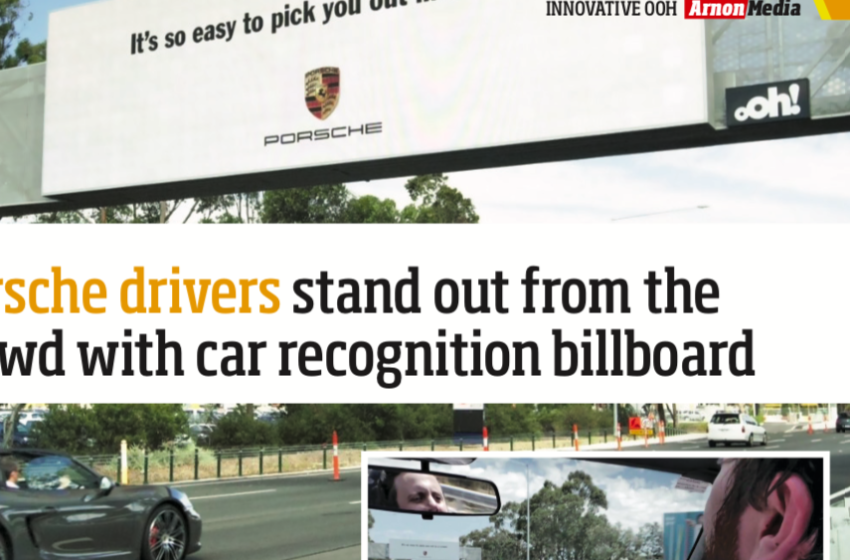 In a world-fIrst advertIsIng campaIgn, porsche uses
car recognItIon technology for a new dIgItal out-of- home campaIgn that wIll dIsplay a taIlored message on a melbourne aIrport dIgItal bIllboard when the luxury car approaches It

The innovative campaign, created by Australia’s largest out-of- home company, oOh! Media automatically change the content on the digital billboard with the message “It’s so easy to pick you out of a crowd” when a Porsche approaches.

The car recognition technology developed by oOh! with Digital Experiences uses IBM software and oOh!’s own content management system ARGLYE to identify oncoming Porsches before revealing the message for 10 seconds.

The new digital campaign further cements oOh!’s position in its leadership of evolving out-of-home from being billboard providers to a new media player delivering the most dynamic
and interactive out of home platforms
for advertisers to better engage with customers.

Other innovations the company has introduced as part of its digital strategy have included the launch of QView and Hijacked integrated online platforms, development of “Parting” technology to

enable contextual
advertising
pending the temperature or time of day, and “trigger” technology that serves up advertisements relevant to the content being shown on its digital assets.

Over one week in 2015, this particular billboard reached up to two hundred thousand travellers as they made their way to one of Australia’s busiest airports

identify if the car is a Porsche. Once a Porsche is detected it triggers the tailored message to be displayed as the Porsche is approaching,” Purcell said. “Over one week in 2015, this particular billboard reached up to two hundred thousand travellers as they made their way to one of Australia’s busiest airports. It’s another great example of oOh!’s unmissable capabilities in reaching audiences. “oOh!’s broader digital strategy is not just about upgrading sites into digital billboards, it’s about creating solutions to help clients find creative ways to engage with their customers.”

Toni Andreevski, Director of Marketing, Porsche Cars Australia, said it’s appropriate that Porsche is part of this world first highlighting the award winningexcellence of the Porsche brand. The power and flexibility of digital technology today is a real winner for high value brands to reach just the right audience.”

The 50 sq m billboard ad on Airport Drive went “live” for five days from January 10 to 15.