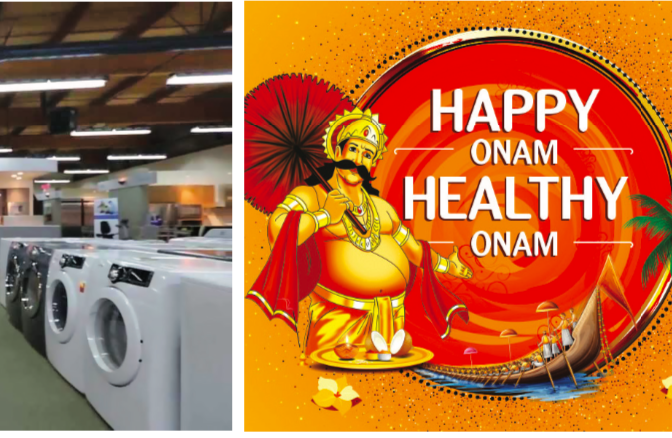 Onam kicks Off the festive sales seasOn in india. hOwever this time the pandemic had played a spOilspOrt althOugh market shOwed signs Of revival

Last two years, flood created havoc in the market during Onam season in Kerala. This time it was Covid 19 which restricted people from going
out or shopping out of fear. The usual festival related buzz was not seen in the markets across the state. Shops have restrictions on allowing the number of customers due to pandemic. Besides it, several towns were categorised into containment zone and some places with triple lockdown on place which made the shops
shut down completely. The government had imposed restrictions on Onam gatherings and celebrations. Even flowers from other states for making floral carpet were restricted. A major chunk of flowers for floral carpet in Kerala used to be brought from Tamil Nadu.

Usually Onam sales is one the best time for most traders and shoppers as the former witness the excellent sales of the year and the latter get discounts related with the festival occasion. Onam kicks off the festive sales season in India. Sales during the 10-day festival offer a glimpse of how the rest of the festive season could pan out for consumer durables firms. Textile shops, white goods, automobiles etc put up massive discounts and offers to attract consumers ahead of Onam. However this time people were a bit cautious of venturing out of their homes and spending. In Kerala, the sales of Kasavu sarees and mundus witness the best sales of the year during Onam season. Festival sales are also big in retail outlets which sell designer saris, Indian wear and Kasavu

sarees and mundus. The NRI’s also contribute a
part of the sales as most of them visit Kerala during August-September as a tradition to get together
for the festival. August also marks the beginning of wedding season in Kerala. Jewellery is another sector which witness huge sales during the Onam season. Apart from the pandemic the price of gold might have also affected the sales.

The recent trends suggest that people are now increasingly opting for online shopping for groceries and food. Some boutiques even offer live video calling services to pick items of customers’ choice and later deliver it to their homes.

Although the pandemic had taken a toll on motorcycle manufacturers sales in India during the lockdown, sales are now increasing as the government has announced unlock fourth phase. Several automobile manufacturers and home appliances stores have extended the Onam offers further to attract more customers to the store.

Across the state, this is also a time when traditional food items such as pappadam, lime
and mango varieties of pickles, banana chips and readymade payasam of different varieties are in huge demand as families stock up for the Onam celebrations at home. This time, most families are making their food preparations at home and in case of placing orders, they are doing so with extreme caution. Government has also imposed strong food safety norms restricting the sale of food items on the roadside which is now a common sight post the lockdown as many people turned to it after they lost their job during the pandemic.

The sales growth of Royal Enfield in July 2020 reported a marginal growth of 3.87% as compared to June 2020. However the Chennai-based company had a substantial improvement in August’s sale. It even announced the delivery of 1000 motorcycles
in Kerala in a single day through its 59 dealerships and 25 studio stores in the state during the Onam. From entry-level Bullet 350 to the flagship 650 twins including Interceptor 650 and Continental GT were

among the delivered vehicles to customers on the day of Onam.

There is also a substantial rise in sales for most of the major manufacturers in the country. A total of 2,34,142 passenger vehicle units were sold in India in August 2020 thereby registering a sales growth of 19.6% as compared to August 2019. There is no doubt that Onam and Ganesh Chaturthi has helped boost the sales for the passenger vehicles.

In the white goods sector, reports suggest that it was a mixed bag. Sales picked up from mid-August ahead of Onam festival in Kerala. Televisions were the most sold product followed by refrigerators. Industry reports suggest that while the sales number was lower than last year, it was better than the gloomy expectations.

The white goods market in India currently worth about Rs.50,000 crore is growing around 15% every year. Every year sales worth Rs.3000 crore are clicked beteween August and December when India celebrates festivals like Onam, Dussehra, Diwali and Christmas.

Television was the number one product category in the festival season followed by refrigerators and washing machine. Discounts and offers announced during Onam also attract more consumers. Although online sales picked up in most areas, products like refrigerators and televisions are purchased from brick and mortar stores by most consumers. Eyeing them, most store owners extended the Onam discounts and offers further.

A simple and lacklustre Onam is not something that Keralites are used to. But the pandemic situation has affected the sales in most sectors. Although
the market showed signs of revival, the increasing number of Covid 19 cases in Kerala has again put in a jeopardy situation. Let us hope that the pandemic subsides and the market revives.